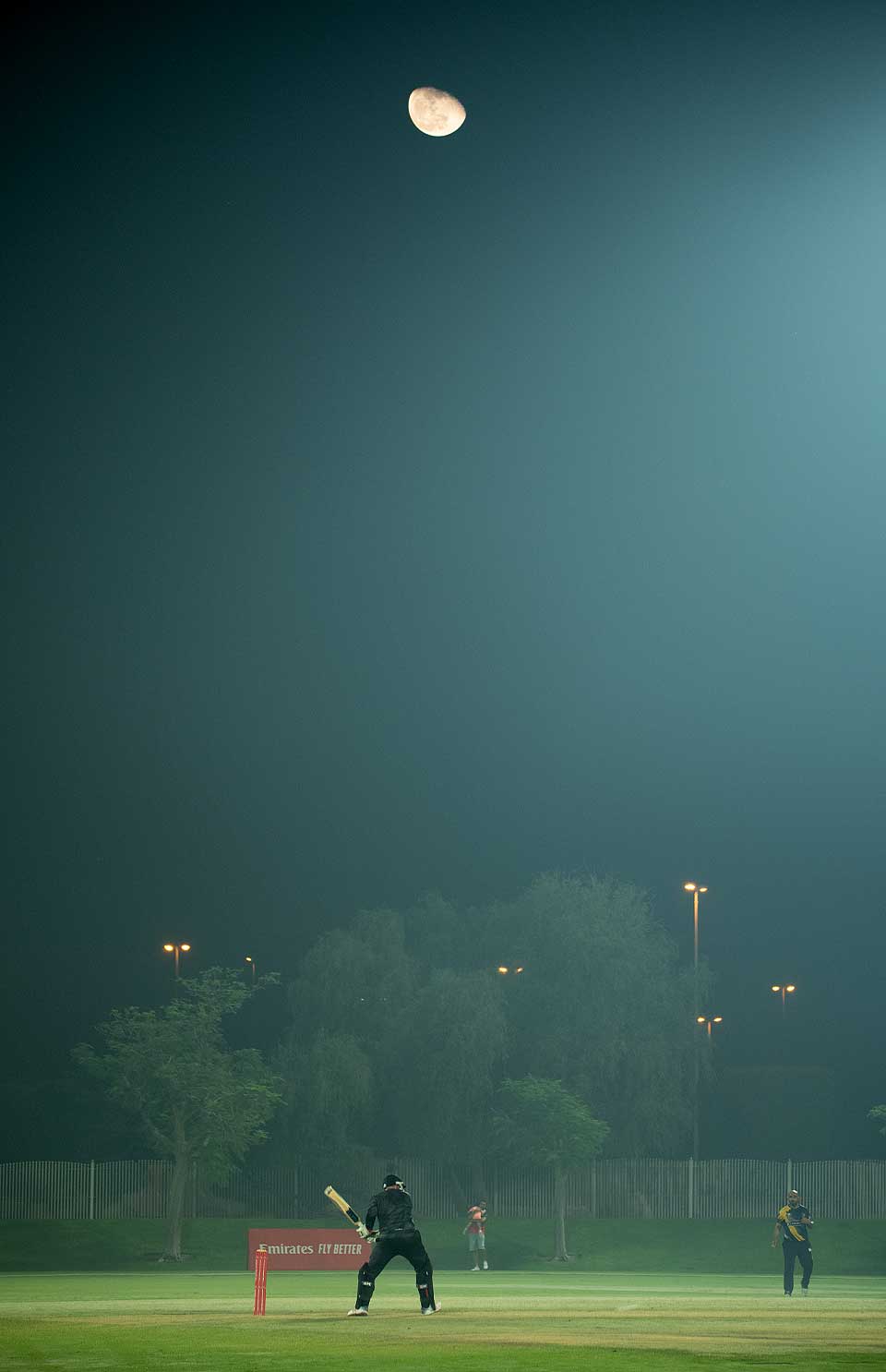 There is no question that the 2020-21 cricket season has a been a great one for Dubai Exiles Cricket Club. The club, formed in Dubai in 2016, had never made any finals, or the Dubai Super League play-offs before. What started out as a tentative, pandemic impacted season, ended with the Exiles reaching three finals and the Dubai Super League play-offs. Not bad for an amateur cricket club that is just approaching its fifth birthday.

Siddhant ‘Sid’ Jhurani has his game face on

The Match Offcials check things over

When Emirates NBD‘s opening batsman, MS Shahir, went for a duck, bowled lbw by Clint Berkenshaw there was an immediate buzz of excitement through the Exiles team, as well as their supporters. The quick wicket was exactly what The Sevens based cricket side needed and Emirates NBD Cricket Club were suddenly 3 for 1. Unfortunately for Dubai Exiles CC, that’s were the excitement ended.

Clint Berkenshaw almost grabbed a wicket off the first ball

Hamza Shujaat get ready to pitch another one

Anurag Nishad who’d opened alongside Shahir was having a great time at the crease, he’d been dropped twice which was a sure sign that he was going to do some damage to the scoreboard. Joined at the crease by MC Charan the pair piled on the runs in quick time. When Anurag Nishad‘s wicket did fall, caught by Clint Berkenshaw off Anshuman Gopal‘s ball Emirates NBD CC were 55 for 2 off just 8 overs.

The real damage was done to the Exiles by MC Charan and Hammad Khan. Charan looked like he was well on his way to a century when he was caught out by a ball from Jay Parmar, caught by Harsh ‘Harry’ Udeshi. MC Charan had scored 82 off just 60 balls which included eight x 4s and three x 6s. It had been a spectacular innings.

The torment didn’t end there for Dubai Exiles Cricket Club. MI Ismail had come in to bat and he clearly had only one thing on his mind, swing at everything. This he did with great success. When he was caught by Clint Berkenshaw, and a spectacular catch it was, off Anshuman Gopal‘s bowling, the middle order batsman had posted 31 runs off only 12 balls. three x 4s and two x 6s had helped him along his way.

When the final ball of the 35 overs was delivered, Hammad Khan was on an unbeaten 59 off 47 and MY Yaseer had come in and contributed 9 off 4. The total of 233 runs was a big total, but Exiles looked like they had a batting lineup that could certainly have a good go at it.

A loose ball gets swatted

Exiles CC opener Jay Parmar got the chase off to a great start. The tall and hard hitting Parmar had made himself very comfortable and after facing only seven balls, had smacked three x 4s and two x 6s and scored 24 runs. Exiles were motoring. Perhaps motoring too much, when things were beginning to look very good for the team in black, Jay was cheaply run out, a wicket that Exiles could ill afford to lose. 34 for 1.

Fellow opener Harsh ‘Harry’ Udeshi was the next wicket to tumble. ‘Harry’ is a solid and reliable batsman but the lightest of edges to Emirates NBD wicket keeper MS Shahir and the Exiles were suddenly 53 for 2. There was plenty of overs and plenty of batting still to come, but things felt ominous.

Clint Berkenshaw is known for being a very aggressive batsman. It wasn’t long before he was finding The Sevens Cricket Grounds‘ ropes and with Siddhant ‘Sid’ Jhurani alongside him the score was pushing along at a rate of knots. The Emirates NBD total suddenly didn’t look out of reach. Sid Jhurani had been doing a great job, when he was finally bowled by SP Pillai, he’d score 53 runs off just 29 balls which included four x 4s and two x 6s.

Jhurani‘s wicket pretty much removed hopes of an Exiles victory, Mohammad ‘AK’ Bosan added two runs before  being bowled by Anurag Nishad and Zeeshan Durrani managed to add a run to the score before b being caught by SP Pillai of MI Ismail.

By the time Clint Berkenshaw was run out (68 runs off 51 balls, one x 4 and fours x 6s) the match was effectively over. Exiles had posted a total of 224 which would be enough to win most Dubai Super League matches, but some dropped catches early in the game and the spectacular innings of MC Charan had made sure Emirates NBD‘s noses stayed in front.