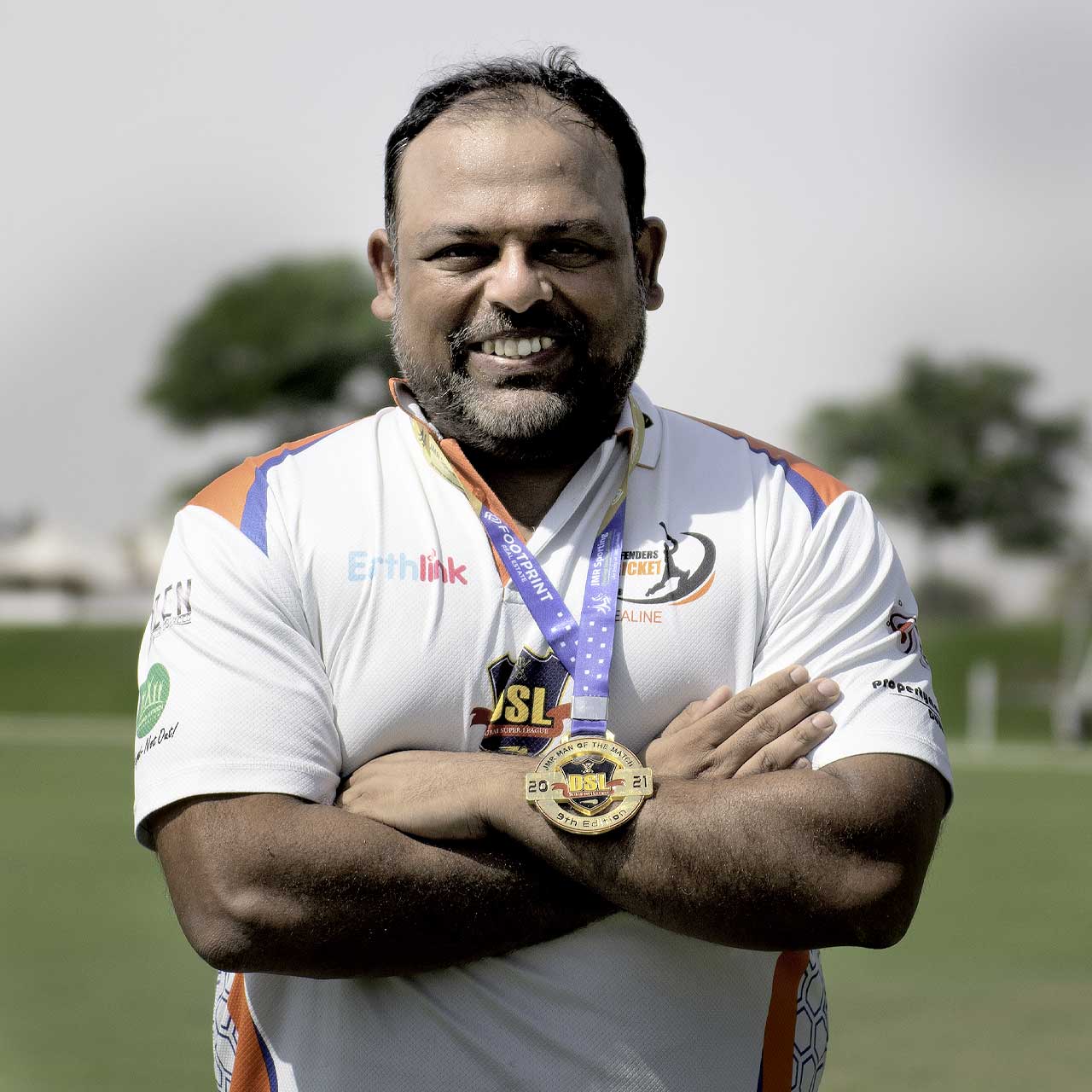 Dubai Exiles Cricket Club managed another unlikely run chase in this season’s Dubai Super League. Masters Cricket Club looked to be very comfortable in the driving seat when Muhammed Adeel hit a blistering 101 off 65 balls for the Reds. An enormous six off the last ball for the big hitter and Exiles CC knew exactly what they had to do – chase down 212 off 25 overs to win the game.

Harsh ‘Harry’ Udeshi kept that on in

It was a day for enthusiastic appeals

It was a decent start to the game for Dubai Exiles Cricket Club. Masters‘ wicketkeeper, Daud, had found a boundary on his way to scoring 11, but a challenging ball from Exiles‘ Anshu Gopal trapped him for lbw. 29 runs on the board, first wicket gone. Fellow opener Danial Baloch was next to go. Danial was motoring along very well, a couple of boundaries and a six, when a loose swipe at a ball from Mitul Kapadia found its way safely into the hands of Anshu Gopal. 47 for 2, just over 6 overs bowled.

Dubai Exiles CC were starting to look pretty pleased with themselves, 47 runs on the board against them, and both openers back in the pavilion. Muhammed Adeel was at the crease for Masters Cricket Club and he had been joined by Haroon Zafar. The two would go on to post an imposing partnership of 118. Muhammed Adeel was in outlandish form. By the time he faced that final ball of the innings, he was on 95 off 64, at the end of the innings he had reached 101 not out. The final ball being hit some way down the E66 to Al Ain.

Harron Zafar had played more than just a supporting role, back in the game after an absence of a few years, he more than adeptly supported his big hitting colleague with a very steady 52 off 54. Finally being bowled out by Sairaj Raghvan.

That was more or less the end of the fireworks for Masters Cricket Club, Jane Azlam came to the crease but was promptly sent back to the changing rooms, a golden duck off a ball from Sairaj Raghvan, caught by Mohammed Saifullah Khan. Masters‘ Captain Bilal, played a small cameo, adding 9 to the Masters CC‘ score, but it was Muhammed Adeel who’d stolen the show in the opening innings. 101 of 65 balls, 11 x fours, and 5 x sixes.

It wouldn’t be any fun if Exiles CC didn’t have some sort of a wobble as they started their run chase. Mohammed Saifullah Khan and Muhammed Akbar Bosan opening proceedings for the Exiles. It wasn’t the most auspicious beginning, with just 14 runs posted, Akbar Bosan‘s wicket was taken lbw by Jane Alam. Vikram Nayak was next in for The Sevens based Exiles. With 1 run contributed after facing 6 balls, Vikram was heading back to the changing rooms after being caught by Muhammed Adeel, again off Jane Alam.

There were some noticeably concerned faces on some of the Exiles players when Vikram‘s wicket was taken. The Exiles only had 22 runs on the board. Harsh ‘Harry’ Udeshi was the fourth man in and between himself and Exiles‘ opener Mohammed Saifullah Khan they really started to move the scoreboard along, with some speed too.

Mohammed Saifullah Khan proved to be the star of the Exiles‘ show. His 7 x fours and 6 x sixes went a very long way to summiting the Masters‘ total of 211. By the time he was caught by Danial Baloch off Junaid Ahsan‘s bowling, Mohammed had scored a blistering 90 off just 49 balls. ‘Harry’ Udeshi had played a vital supporting role, scoring an unbeaten 66 off 54 balls and making sure that the singles and twos, sometimes risky ones, were added to the Exiles‘ score.

The Exiles were rolling now. Captain Shayan Khiliji‘s wicket was taken for 8 runs, Sairaj Raghvan had joined ‘Harry‘ in the middle of the The Sevens‘ luscious green oval and knocked an unbeaten 26 off only 18 balls. Exiles CC had put their foot comfortably on the go peddle and driven past the Masters CC total with more than 2 overs to spare.

Exiles Cricket Coaching to be delivered by Rajasthan Royals and a team led by Dougie Brown and Jacques Stolz
August 1, 2021