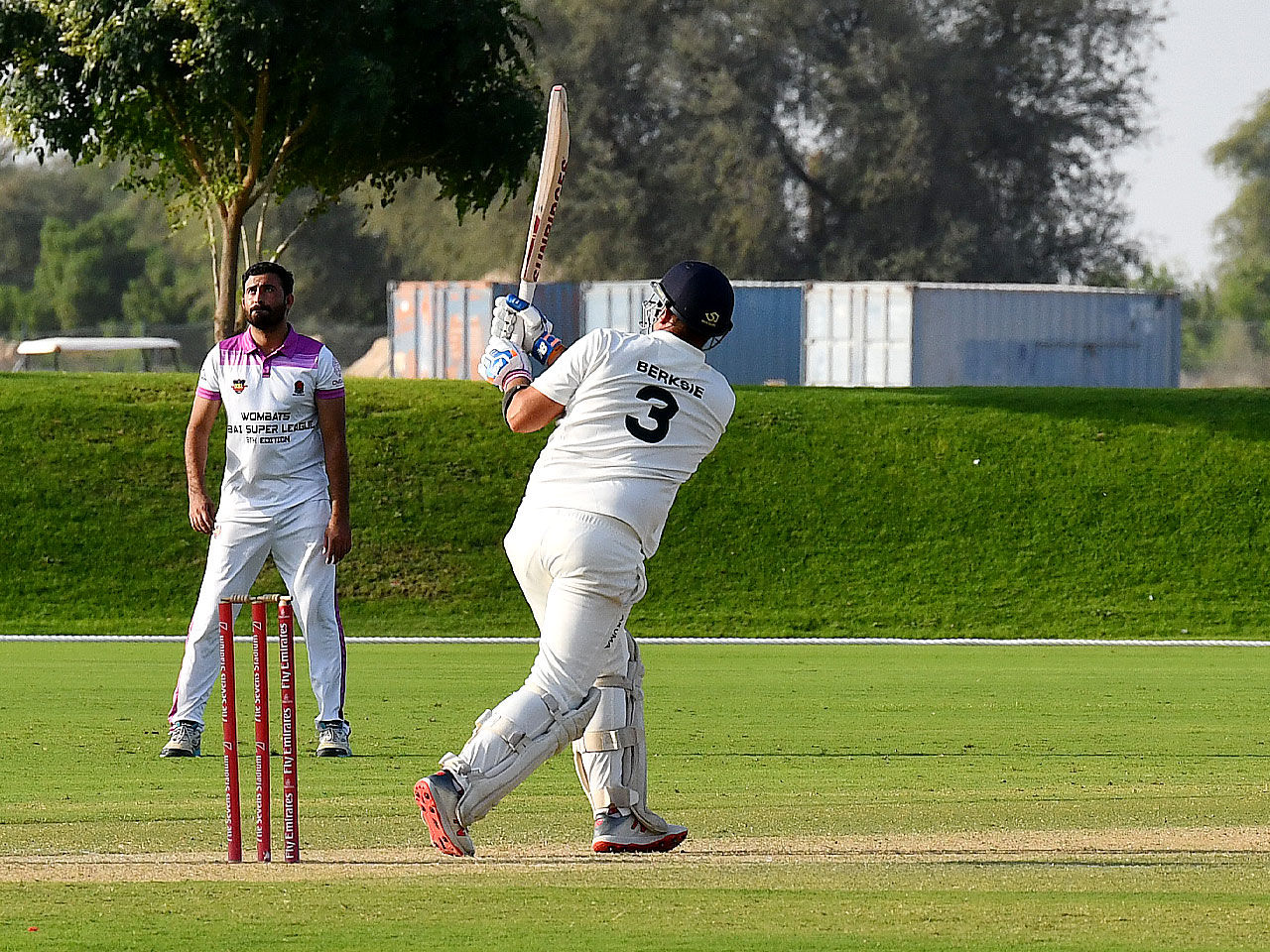 It was an early start for the Exiles cricketers at the Sevens Cricket Grounds as they took on the Zabeel Mammoths in the Mammoth Cricket League. The Exiles came out of the blocks extremely quickly, with Zabeel on the oval and batting they quickly found themselves with 2 runs on the board with Chirag Patel’s wicket dismissed from the bowling of Anshu Maheshwari. It wasn’t long before Zebeel looked to be in deep trouble, quick falling wickets, Chetan Sharma caught by Bhavik Thakkar off the bowling of Usman Azim, Mithun Vora falling to the bowling of Ashley Connick and Ranjeet Chavan clean bowled by Usman Azim.

At 18 for four wickets, it looked like a route was on the cards. Exiles were dominating the match but the arrival of Rajesh Thadani at the crease steadied the Zabeel ship with a solid batting performance and the addition of 44 runs to the Zabeel score before being clean bowled by Mitul Kapadia. A low total looked on the cards for the Exiles run chase but, a significant contribution of 37 runs from Lucky Abbas gave the scoreboard a look of respectability, eventually reaching a score of 133 off their 25 overs.

Exiles openers Vikram Nayak and Moin Deshmukh got the chase off to a decent start, posting 31 runs on the board before Moin Deshmukh fell to the bowling of Rajesh Thadani after contributing 12 runs including a couple of fours. It was an interesting position for the Exiles Mammoth League team, without a win in this season’s campaign, but some near misses, could the Exiles steer themselves to the victory?

Siddhant Jhurani came to the wicket for the Exiles, and quickly helped to answer that question. 47 runs off 39 balls including three x 4s settled the Exiles heart rates and went a long way ensuring that the Mammoth League team scored it’s first win of the campaign. Shayan Khilji contributed 28 runs to the final total of 137 which included two x 4s.

The Dubai Exiles Cricketers gave themselves every chance of qualifying for the Dubai Super League Play-offs with a convincing win over Dubai Stallions – Arabians CC at the Sevens Cricket Grounds this afternoon. It’s going to be a nervous wait as other matches and results play themselves out over Friday and Saturday.

Asif Rajah contributed to the bowling attack with 1 wicket

Lots of congratulations after another Arabians’ wicket falls

The Exiles were on a roll, there were no signs from the Dubai Stallions of any form of recovery and they were soon dismissed for a total of only 79 runs off 19.4 overs. Himanshu Gaur was the Stallions’ biggest contributor with 18 runs before a wild win saw him caught by Clint ‘Berksie’ Berkenshaw off a tempting ball from ‘Nick’ Vish, the rest of the batting order was quickly dispatched and the Exiles were looking at a low run chase.

‘Harry’ Udeshi swats one away

Jack Luffman sends one out of the park for six

Jack Luffman hit an unbeaten 38 off 30 balls which included five x 4s and a 6, batting his way from the start to the end of the Exiles run chase. ‘Harry’ Udeshi looked like he was getting set to enjoy himself but a loose drive off the bowling of Hamza Sajjad saw the ball go skyward for a relatively simple catch which was taken care of by Himanshu Gaur. Exiles had 30 runs on the board, one batsman back in the pavilion. Ajay Krishnan came to the crease and contributed 10 runs before being caught by Usman Khalid off the bowling of Shabir Ali.

There would be no ’48’ for Clint ‘Berksie’ Berkenshaw in this innings, there just wasn’t enough of the run-chase left for Clint to contribute his almost metronomic 48 runs. But in typical Clint style, with 5 runs needed to win the match, the ball was sent out of the ground for 6 and the match was over. A comprehensive win for the Exiles Cricketers and now all eyes turn to the other results…

Clint Berkenshaw at the crease

The final ball of the match – hit for 6