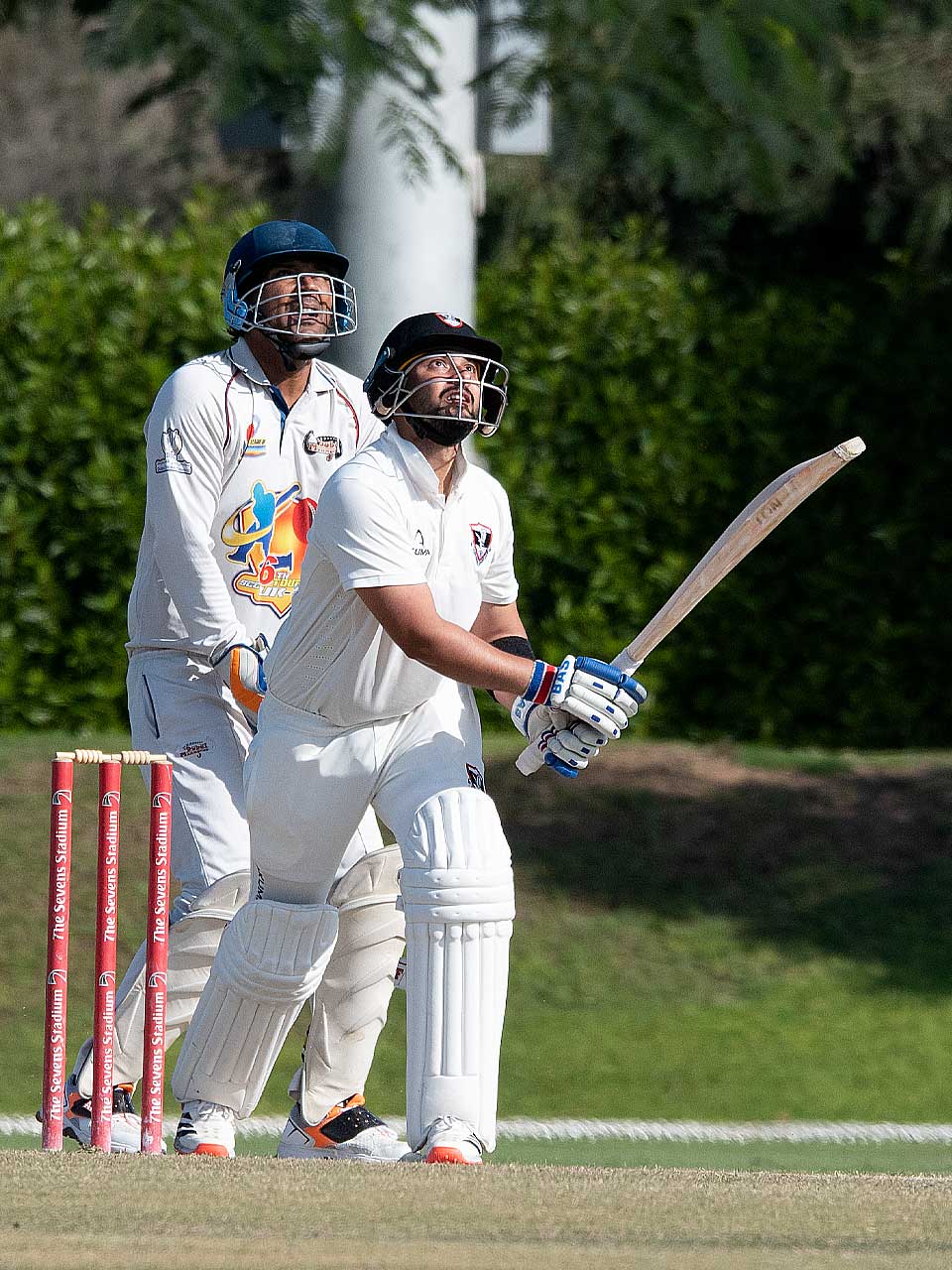 Dubai Cricket Council‘s Mammoth Cricket League keeps on producing hugely entertaining and sometimes nail biting matches. This Friday was no exception. Once again the Exiles found themselves with the last ball to win the match against Zabeel Mammoths Cricket Club.

The Exiles were the first out of the blocks, after only 4 overs Zabeel had lost 4 wickets and only had 26 runs on the board. Opener Vikas Malhan had gone for a duck, Sangit Gopinath quickly followed suit, but did post a respectable 15 runs to Zabeel‘s tally. Ammar Abbas quickly came to the crease and then departed just as quickly as he’d arrived, another duck. Chetan Sharma did a little better than his predecessors, adding 4 runs before being clean bowled by Vivek Desai.

At 26 for 4, the match was threatening to be over before it started, Ranjeet Chavan had been and gone for 7, caught by Shayan Khiliji off the bowling of Ashaam Baati.

Cue the arrival of Sujit Salian for Zabeel Mammoths. It’s a common occurrence in the Mammoth Cricket League that the middle order seems to be loaded with the heavy hitters. Sujit set about the Exiles’ bowling attack and steered himself to 50 runs off 51 balls which included five x 4s. Bhavik Thakkar looked pretty happy when he picked up this wicket, helped by a decent catch from Sulayaman Butt. Zabeel pushed along, and set a target of 140 to win for Exiles Cricket Club.

The smiles on the Exiles‘ faces diminished relatively quickly. Opener Vikram Nayak was caught and bowled by Ranjeet Chavan, Vikram had unluckily caught a thick edge which sent the ball skywards and into the bowler’s very grateful hands. 3 runs on the board, 1 wicket down, no need to panic. By the time Exiles Cricket Club had 24 runs on the board, there was plenty to panic about. 3 more wickets had been added to the Zabeel bowling attack count.

Sulayaman Butt had gone for 15 which included a 4 and a 6. Shayan Khilji was bowled out after adding 5 runs and Pratik Shettigar had been caught by Sujit Salian without advancing the Exiles’ score.

Bhavik Thakkar was at the crease and joined by Khalid Raja, a similar story to the Zabeel innings, the Exiles middle order became comfortable and started to knock the Zabeel bowlers in various directions and worked hard running between the wickets. Bhavik was caught in the deep when chasing a second 6, but he’d added 42 runs to the scoreboard and the outcome of the match was in the balance.

Khalid Raja hit 33 off 25 balls including a 6 and a very timely 4. The Exiles had gone into the final over needing 11 runs to win the match, with he fielding side stretched out along the boundary, he managed to thread the ball through the only gap on the field and an unlikely win suddenly looked possible.

Vikram Nayak catches an edge and sends one skywards

Moin Deshmukh had come in for Usman Azim who’d unfortunately been run out after some indecision. Moin had been in this situation 2 weeks earlier, a tight match, a final ball and the chance of a win. This time the final ball fell to Ashaam Baati, 1 ball, 2 runs needed for the win. Full credit has to be given to Ashaam, he’d just come to the crease after Khalid Raja had been bowled by Sanjay Phatak, he’d just centred his bat and his first ball was the last ball of the match.

The win wasn’t to be, Ashaam found some space and the sprint for the draw was on. Moin and Ashaam scurried between the wickets and scored the one run to tie, what was once again, another hugely entertaining Mammoth League cricket match.

Zabeel Mammoths set a target of 140 to win