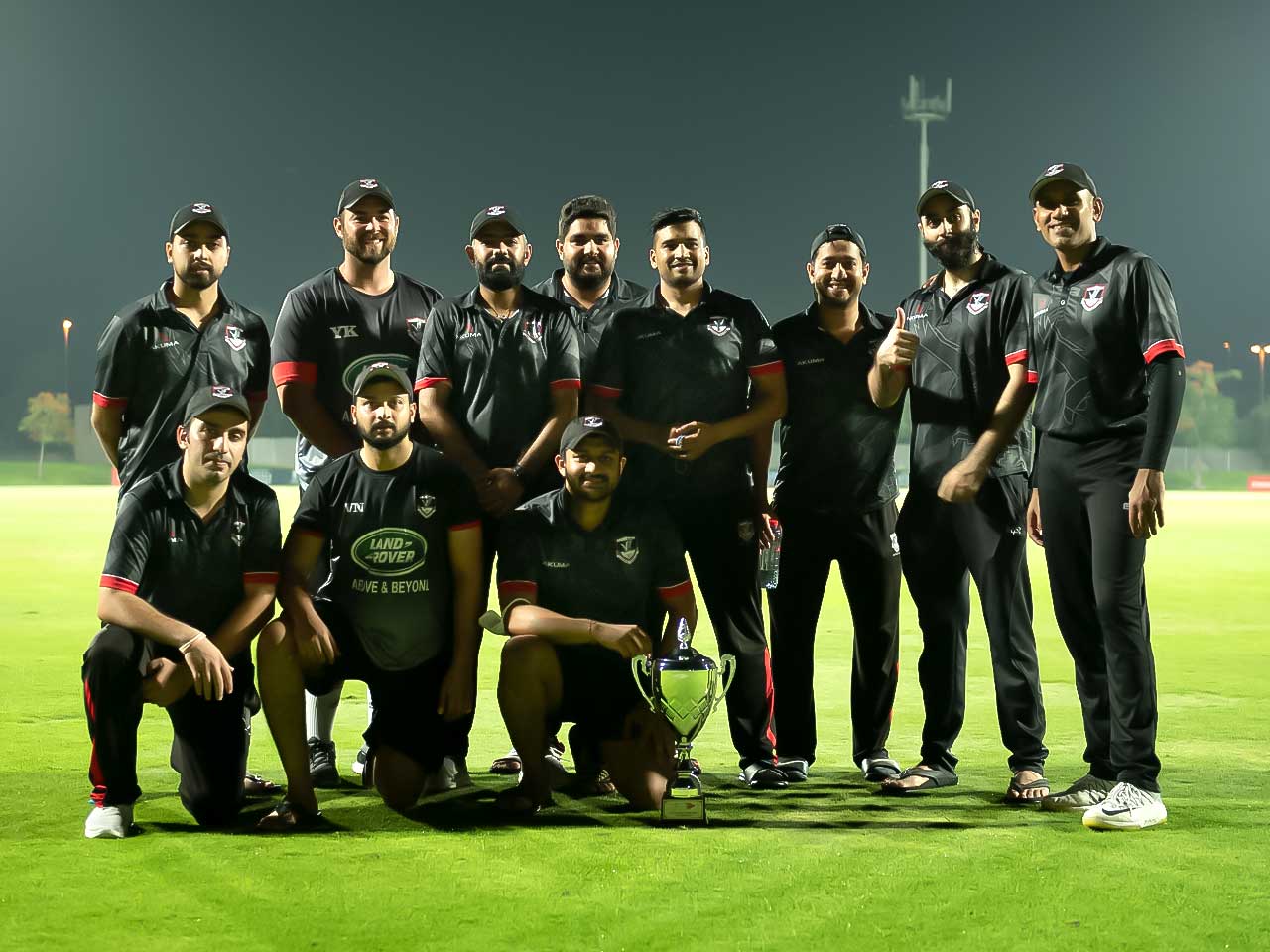 Dubai Exiles Cricket Club had never reached the final of any cricket competition until the 2020-21 season. Two finals had already been played at Skyline in Sharjah, one in the Tuesday league and another in the Friday T20 competition, the Exiles coming up just short on both occasions. It was a late Thursday evening start at The Sevens Cricket Grounds and perhaps, this time, it might be third time lucky…

Clint Berkenshaw gets the warm up started

Harry Udeshi and Clint Berkenshaw have a discussion

Mithul Kapadia gets his first of 4 wickets

DCC Challengers were the first to bat. Openers Naveen Kumar Gorthi and Shakeer Hydru wasted no time in opening their shoulders and chasing the boundaries. The Challengers‘ game plane was obvious from the outset, hit everything you can, as hard as you can. When the first wicket fell, Naveen Kumar Gorthi (caught by Varun Kumar off Mithul Kapadia) had already hit 31 off just 21 balls, a knock that included 4 x fours and a six. Challengers were already 42 for 1 off just 27 balls.

Mazhar Hussain and Shanib Kastha had different ideas. They had no desire to let Exiles CC get any sort of momentum. As has been so often the case in the 2020-21 cricket season, the middle orders of opposing teams have been loaded with big hitters and chance takers. They say that fortune favours the brave – it certainly did in this game.

Mazhar Hussain scored 25 runs off 20 balls and when he was caught by Varun Kumar off Bhavik Thakkar‘s bowling, it only opened the door for Junaid Shamsu to make himself comfortable in the middle of the cricket oval. Shanib Kastha had clearly enjoyed his score of 39 (caught by Pratik Shettigar off Mithul Kapadia) but Junaid Shamsu was looking ominous. 36 runs off just 18 balls (caught by ‘Nick’ Vish off Divjot Singh), which included three x 6s and all of a sudden DCC Challengers were 185 for 5 and there were still more than 5 overs left to go.

Tasdeeq Kazim and Akshay Jotin were the last of the meaningful contributors to the DCC Challengers‘ big total. Tasdeeq Kazim scoring 17 off 15 before being caught by Clint Berkenshaw off ‘Nick’ Vish. Akshay Jotin hit a quick fire 16 off 11, caught by Varun Kumar off Divjot Singh. By the time the last ball of the 25 overs had evaporated, DCC Challengers has amassed a score of 224 runs and Exiles CC would need to score almost 10 runs an over to be in with a chance of overhauling their opponents.

It was obvious that Exiles Cricket Club needed to get off to a great start, but by the time the match photographer had returned from the break with a cup of tea, Exiles‘ opener Varun Kumar had already been returned to the pavilion’s changing rooms. Clint Berkenshaw was next in for Exiles CC. The powerful South African can usually make the boundary a relatively dangerous place for spectators to sit. When Clint dragged a ball on to his wicket, bowled by Tasdeeq Kazim, the DCC Challengers‘ clearly knew they’d removed one of the Exiles‘ big threats and were evidently delighted about it. Exiles CC were two wickets down with only 14 runs on the board. It was certainly not looking encouraging.

Where the opposition’s middle order had been destructive, it was not going to be the same for the Exiles on this particular evening. Pratik Shettigar went for 7, just as he looked like he might get something going. Shayan Khiliji was run out after adding 14, Vikram Nayak added 10 before being bowled by Safdar Badami and Divjot Singh went for 6.

At 113 for 6 off 17 overs, Dubai Exiles Cricket Club were clearly in a lot of trouble. Opener Harsh ‘Harry’ Udeshi was the next wicket to fall, ‘Harry’ had steered his way to a very respectable 64 off 53 balls during his 90 minutes at the crease.

Vikram Nayak swats one away

Bhavik Thakkar did his utmost to try and move the Exiles‘ total along and give it some respectability. When the match drew to a close, Anshu Maheshwari, ‘Nick’ Vish and Mithul Kapadia had returned to the changing rooms for just 4 runs. Bhavik had reached an unbeaten 27 off 18 balls but Exiles CC had fallen well short of causing a nervous sweat for the DCC Challengers. Exiles 148 all out.

Every Cricket Club needs its supporters!