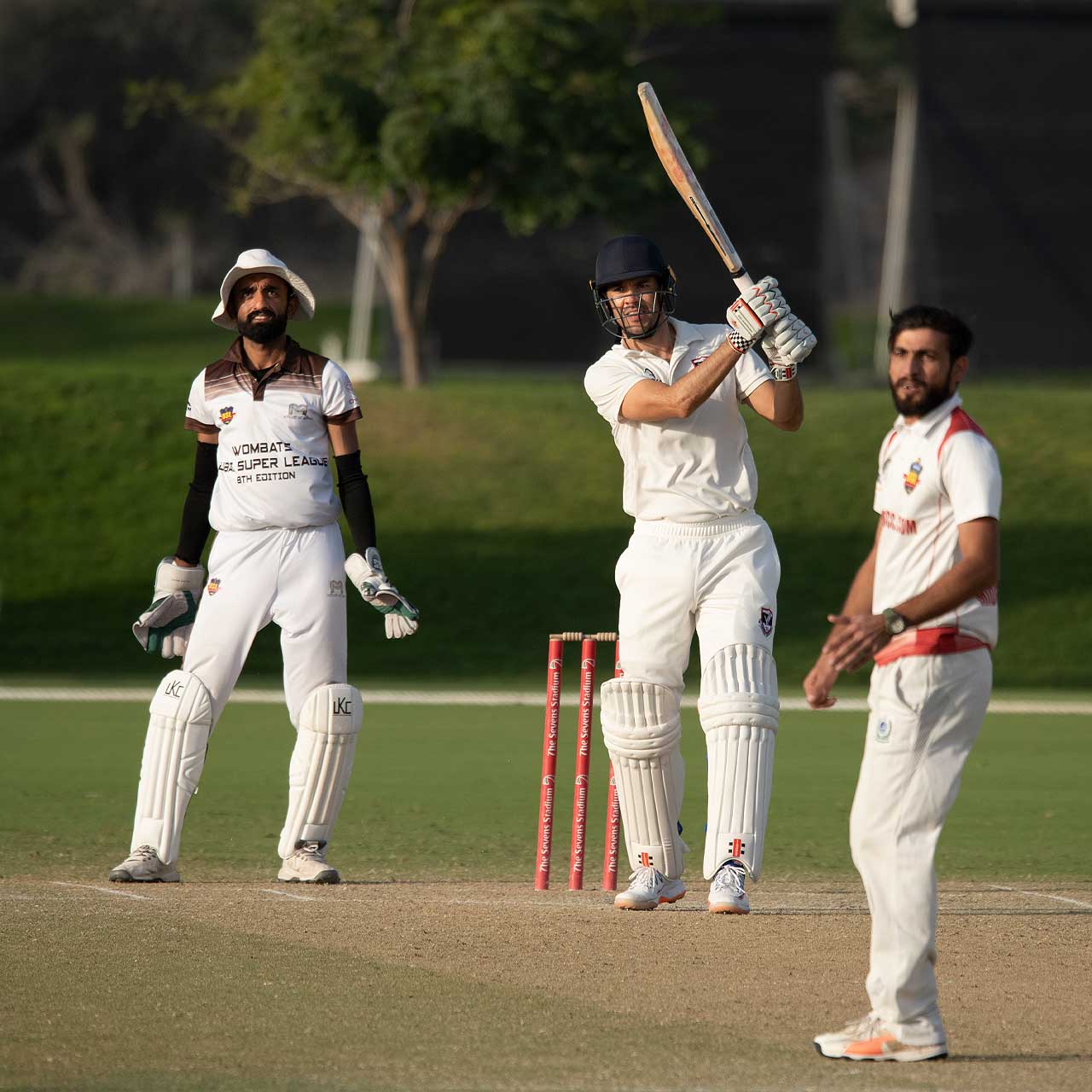 Another frustrating match for Dubai Exiles Cricket Club in the Dubai Super League as too many missed opportunities add up to a 2 run defeat to Mideast Metals Cricket Club.

It was a case of another ‘one that got away’ for the cricketers of Dubai Exiles. There were plenty of spectacular moments, the game was riveting (see what we did there), absorbing, and distilled itself down to a last ball win, lose or draw for Exiles Cricket Club. Despite the evident hard work, the effort and the dogged determination to get a result, ultimately, too many missed opportunities allowed Mideast Metals CC to post a total that had never looked likely.

A big appeal from Zeeshan Durrani

The Exiles got off to a great start. Mideast Metals CC opener Khurram Khawaja was caught by Harsh ‘Harry’ Udeshi of Jay Parmar‘s ferociously delivered ball and Mideast Metals were 7 for 1 off just 2 overs. Fellow opener N Khan Khan was next to go, clean bowled by Naren ‘Nick’ Vish contributing only 8 runs. The Exiles were looking like good value, Mideast Metals were down 2 wickets, 27 runs on the board and 5 overs gone.

Mohammed Ali Nagi was at the crease for Mideast Metals and we know from past games that the he is capable of doing considerable damage if left to get into his rhythm. This is where Exiles Cricket Club‘s hard work began to falter, the bowling attack remained full of energy and intent. But opportunity after opportunity presented itself for Nagi’s wicket and when it finally fell, caught by Harry Udeshi of a ball from Mohammed Rizvi, Nagi had again done significant damage. 56 runs, which included a couple of enormous 6s.

Clint Berkenshaw and Dave Adams have a discussion

Jay Parmar is the sort of batsman that it would make far more sense to watch while wearing a baseball cap and eating a hotdog. He goes after the ball with the sort of enthusiasm and similar success that Barry Bonds would land a ball in the San Francisco Giants‘ car park. When Jay’s wicket did fall, again attempting to hit one of the hotdog sellers in row z, he’d scored 45 of 20 balls, crossed the boundary rope 4 times and cleared the tree line on 3 occasions. Exiles were looking very good, 49 for 1, not even 4 overs completed.

The wheels didn’t so much as come off for Dubai Exiles Cricket Club, more found themselves battling to turn with any real momentum in a vat of molasses mixed with slow setting cement. When Jay Parmar departed, the Exiles were scoring 14 runs an over, but as the clock ticked through the middle order, the run rate slowly but surely slowed. When big hitting Sairaj Raghaven‘s wicket was taken by a ball from Hazrat Bilall, the Exiles run rate was at 7.68.

There had been some decent performances in the Exiles middle order, Clint Berkenshaw and Dave Adams had each contributed 17 runs, Mohammed Rizvi had scored 23 from 21, Divjot Singh and Sairaj Raghaven had also scored 23.

‘Nick’ Vish and Zeeshan Durrani held out to push the match to the wire. In fact the final ball. Again. ‘Zee’ had hit 13 off just 7 balls and given Exiles CC a chance, with just 2 balls to go he chased a 6 but was caught by Mohammed Farooq Momand off Hazrat Bilall. After Zee’s wicket disappeared the maths that the Exiles were faced with was simple, 4 runs to draw, anything over that was a win anything below that a loss. ‘Nick’ gave it a pretty good go, but the boundary remained elusive and Dubai Exiles Cricket Club finished 2 just runs short.