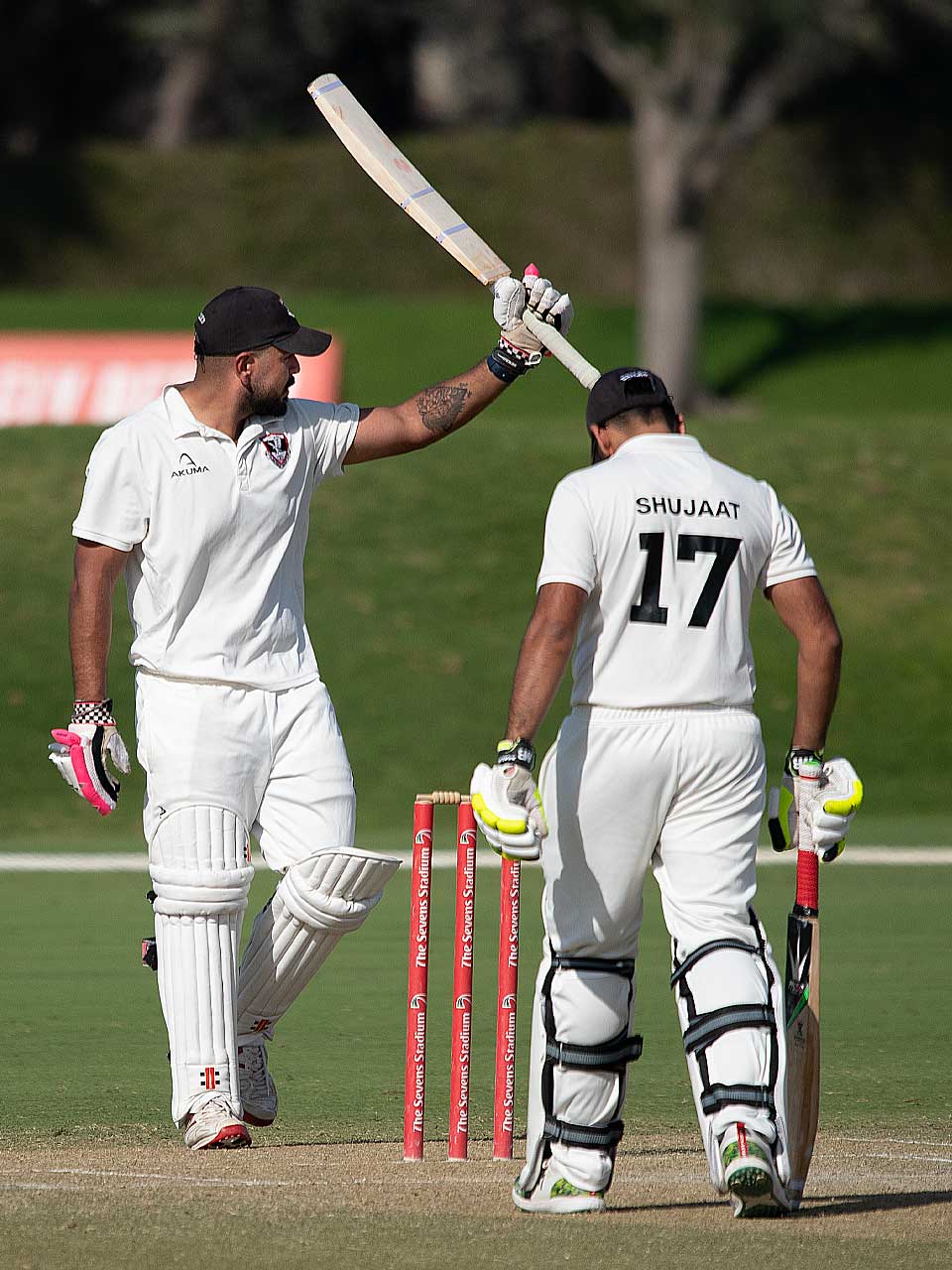 There’s a 1999 Oliver Stone movie called ‘Any Given Sunday’ which suggests that you don’t know what’s going to happen in sport until the day comes, goes, and the outcome is revealed. After last weekend’s frustrating loss to Jabal Ali Mammoths, Exiles Cricket Club‘s’ DCC League of Mammoths side put in a spectacular performance both with the bat and the ball, dismantling league leaders Zabeel Mammoths, with surgical and unrelenting precision. You just never know… ‘Any Given Friday…’

Siddhant ‘Sid’ Jhurani sends one away for a 6

Vikram Nayak opened the batting for Exiles Cricket Club, along with Sulayaman Butt. With just 18 runs on the board, Sulayaman‘s wicket was taken, caught by Harish Menon off Abhi Chavan‘s bowling. It would be a long wait for the Zabeel Mammoths before the next Exiles’ wicket would fall. After 79 minutes, opener Vikram Nayak was caught by Akshay Rathore off Sujit Salian. Vikram had made a major contribution to the Exiles scorecard, 64 runs off 54 balls, five x 4s and a 6.

While Vikram Nayak was busy rattling the Exiles score along, Siddhant ‘Sid’ Jhurani had come to the crease and stomped on the accelerator peddle, hard and all the way to the floor. While ‘Sid’ was clearly enjoying himself, on his way to 107 off 60 balls, an innings that included ten x 4s, and three x 6s, he’d been more than ably assisted by Sairaj Raghavan who had the same idea about how an accelerator should be used. 36 runs of just 17 balls when, he was well into his stride when he was unluckily run out.

Siddhant ‘Sid’ Jhurani was caught off the final ball of the innings. Hamza Shujaat had come to the crease and hit an unbeaten 16 off just 8 balls, Exiles Cricket Club had posted a total of 244 runs off the allotted 25 overs.

Exiles’ Hamza Shujaat takes the first of his 5 wickets

Vikram Nayak had a fantastic day with bat and ball

Sujit Salian is a prised wicket, and when he went for only 2 runs, again bowled by Hamza Shujaat, but this time caught by Exiles’ Wicketkeeper Pratik Shettigar, the match was more or less over as a contest. Zabeel o only had 12 runs on the board, and 4 wickets were back in the pavilion watching proceedings. Harish Menon had a decent go, he’d added 30 to the Zabeel total before being caught by Pratik Shettigar of Bhavik Thakkar.

Shaman Khilji ready to catch one

The Zabeel innings didn’t provide too much of a test on this particular Friday. Of the remaining batsmen, Abhi Chavan managed a decent 34 of 32 balls.

Hamza Shujaat takes a well earned rest – 5 overs, 27 runs and 5 wickets. A useful 16 runs of 8 balls when batting too

Zabeel Mammoths finished with a total of 128, 117 runs short of their target off almost 21 overs. On this particular Friday, Exiles Cricket Club had enjoyed a great day with the bat and a spectacular afternoon in the field. Hard work and effort, something that was not so prominent in their previous outing, had ensured the win and pushed Exiles Cricket Club to the heady heights of the top of the Mammoth League Table.

Usman Azim fires in from the outfield