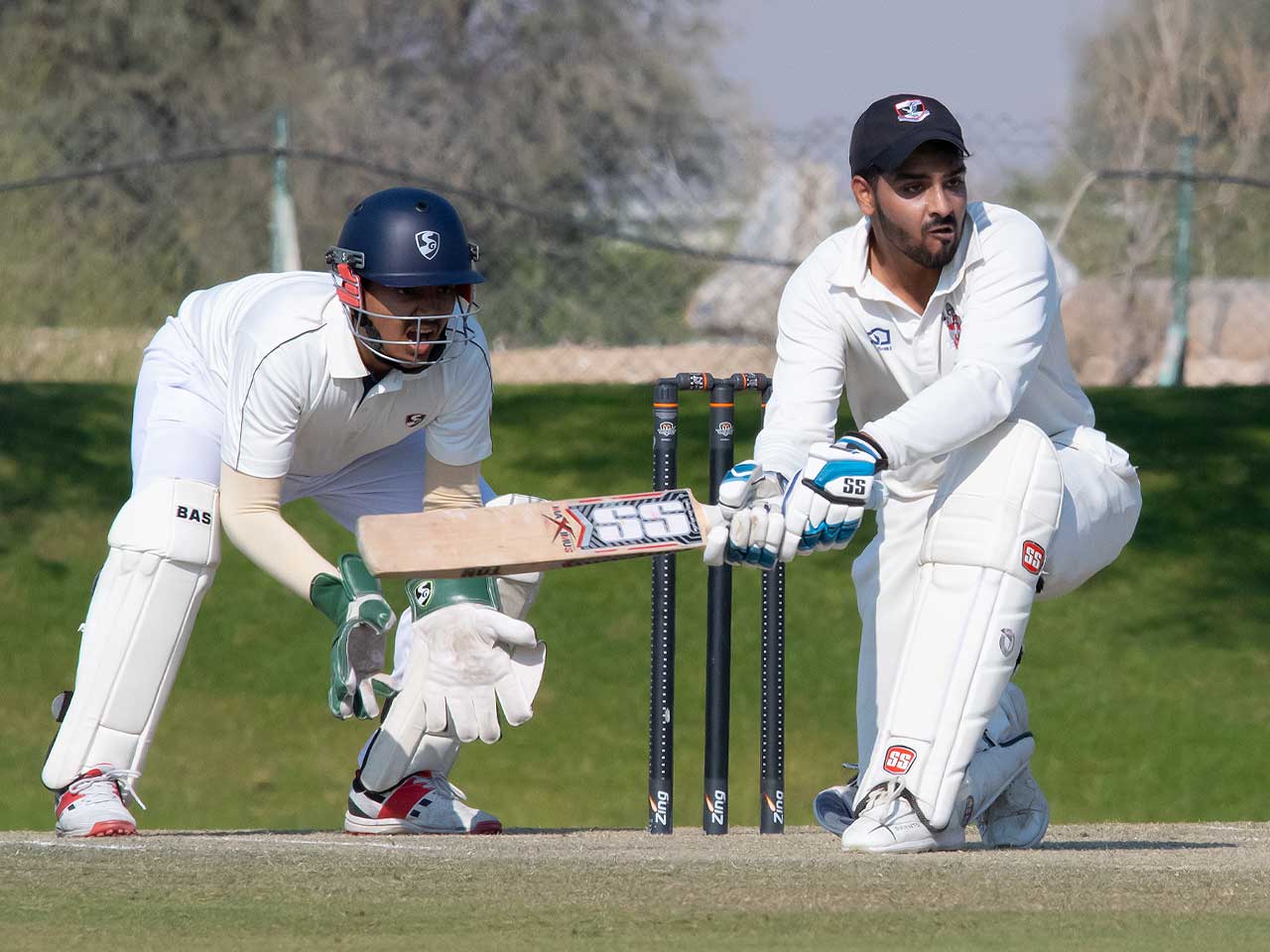 Dubai Exiles Cricket Club took to oval number 1 at The Sevens Cricket Grounds on Friday afternoon with three new faces in the eleven for the return match against Jumeirah Mammoths in DCC’s League of Mammoths. The stand out performance was the swashbuckling batting performance of Sairaj Raghavan, Sairaj, fresh from collecting his playing kit from the Exiles Clubhouse on Wednesday evening, unleashed a mesmarising batting performance…

Sulayaman Butt scored 37 off 31 balls including a 6

Exiles CC openers Varun Kumar and Moin Deshmukh got the Exiles batting off to a steady and decent start. Varun Kumar posted a score of 18 before being clean bowled by Jumeirah’s Lucky Abbas. Varun’s dismissal opened the door for Sairaj Raghavan to come to the wicket and give everybody a taste of what he can do with a decent piece of willow.

A quick chat about bowling tactics

Varun Kumar weighed in with 2 wickets for Exiles Cricket

After almost an hour, Moin Deshmukh was trapped lbw off the bowling of Harshit Seth, Moin had contributed 23 runs to the Exiles’ score and given Sairaj Raghavan a chance to bed himself in to League of Mammoth Cricket.

Sulayaman Butt has been a steady performer for Exiles Cricket this season, another solid performance and another 37 runs contributed before being caught by Harshit Seth off Ambey Parwatkar‘s bowling. By the time Khalid Raja came to help push the Exiles total along, Sairaj Raghavan was well on his way to an unbeaten 85 of 61 balls which included five x 4s and three x 6s.

Exiles Cricket Club had set a target of 188 to win for Jumeirah Mammoths.

Khalid Raja laments the one that got away

Jumeirah wickets initially came relatively easily, with 12 runs posted Safdar Badami was bowled by Usman Azim for just 5. Ambey Parwatkar, who batted well was gone when 42 runs had been scored, Vikram Nayak removing his middle stump. Lucky Abbas had no luck at all, lbw by Varun Kumar for no score.

Usman Azim must have been moonlighting in darts competitions in recent months, two spectacular run outs followed, both SGP Pagarani and Vijay Mehra were run out after the Exiles’ former International removed their bails with some extremely accurate throwing from the outfield.

Things were looking very good at this point for Exiles Cricket Club, until Sheldon D”cruz came to the wicket for Jumeirah Mammoths and decided that now would be a great time to put in an excellent batting performance. By the time D’cruz had amassed his 65 runs off just 35 balls, he’d send the ball over the boundary rope for 4 runs on 7 occasions and followed this up with three x 6s. When chasing another six, Moin Deshmukh caught D’cruz just short of the boundary in nonchalant style, Harish Sadarangani delivering the ball that mattered,.

With the dismissal of D’cruz, Jumeirah’s chance of pulling off an unlikely win had evaporated. As the match entered the final over, Jumeirah Mammoths were left 10 runs short with no more over remaining, and Exiles Cricket Club looked extremely happy about balancing out their defeat on Christmas Day afternoon.