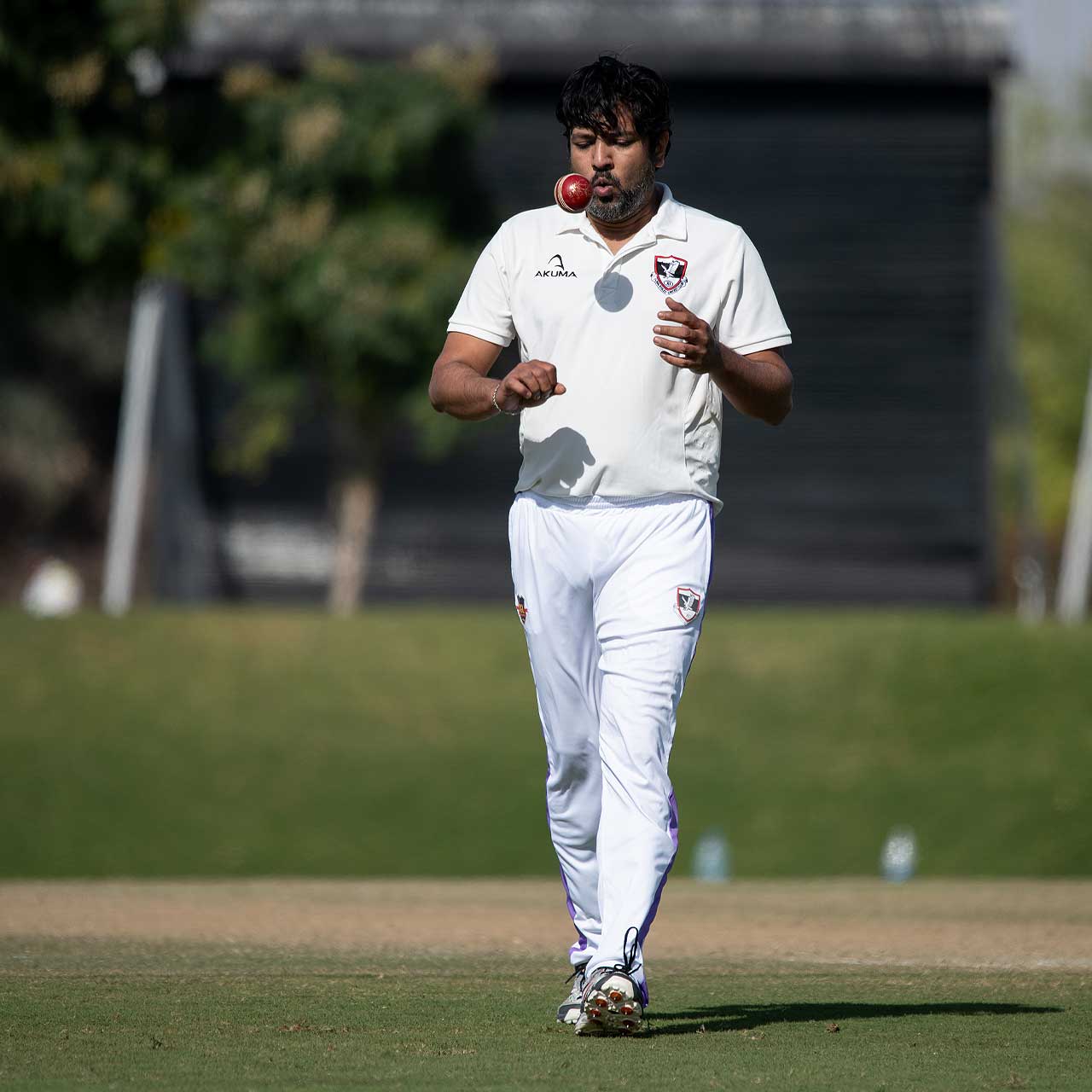 Dubai Exiles Cricket Club‘s Super League match with Wombats Black turned out to be a frustrating day for the Exiles. Exiles Cricket Club had a batting lineup that would cause most Dubai Super League teams a problem, however,  the frustrations of the Exiles’ bowlers was written all over their faces. It was one of those days when every 50 – 50 ball or mishit from the opposition seemed to find safety…

Jack Luffman with his ‘serious face’ on

It would be fair to say that it was probably the top 2 sides in this pool of the Dubai Super League that faced off against each other at The Sevens Cricket Grounds on Friday afternoon. Both teams would have had high expectations as proceedings got underway at 1.15pm. As it transpired, it was an incredibly frustrating afternoon of ‘if onlys’ and ‘what ifs’ for Dubai Exiles Cricket Club.

Wombats Black opened the batting, and their opening pair of BI Idrees and Rahul Soni did a fantastic job of getting the wombats out off their starting blocks and off the races. By the time Rahul Soni was stumped by Divjot Singh from Zeeshan Durrani‘s spin bowling, Wombats Black had 134 runs on the board. Rahul Soni had scored 82 off 41 balls, found the boundary 6 times and cleared the boundary on no less than 7 occasions.

By the time the final ball of the 25th over had been propelled down the wicket, Wombats Cricket Club had a total of 231 runs on the board. Hasnain Raza had come in as 4th man in the batting order and applied himself superbly, an unbeaten 64 of 34 balls, and left Exiles Cricket Club with quite a chase on their hands.

Just over 9 runs an over needed by the Exiles, they were hoping to have a chase of around 8 an over, but 9.28 was certainly doable with the batting lineup that was on offer by Exiles Cricket Club.

Jack Luffman got off to a decent start

Probably not in agreement with the decision

Jay Palmer certainly fancied the chase, in just 9 balls he’d scored 20 runs which included three x 4s and a 6. When another 6 opportunity presented itself off KB Balasubramanian he went for another rope clearing shot but on this occasion, slightly too much hang time allowed HG Ghaus to get under the ball just short of the boundary and end what was looking to be a very promising innings.

Exiles’ opener Jack Luffman was, unfortunately quick to followl, given lbw off KB Balasubramanian. Jack clearly wasn’t happy about the decision, but the Umpire’s decision is final, whether it’s right or wrong and Jack was on his way back to the pavilion after scoring 10 runs.

Definitely not in agreement with the decision

With both Exiles openers disposed of and only 35 runs on the board Clint Berkenshaw and ‘Sid’ Jhurani had made themselves reasonably comfortable in the middle of proceedings and were doing their best to bump the Exiles’ score along. When Sid’s wicket was taken, he’d added 30 runs to the Exiles total, Exiles had 98 runs on the board off 11 overs, The chase was, just about, still on.

Clint Berkenshaw has made a habit of just ‘going for it’ when he comes in to wield his bat around. Just about everybody around the oval knows what’s coming, but it’s very difficult to stop. After smacking the ball around the park for 52 runs, with a suitable sprinkling of 4s and 6s thrown into the mix, Clint was eventually caught by Kiran Naidu, Saadique Merchant the bowler.

Ultimately, the match boiled down to that 9.28 an over run chase. In the end, Exiles Cricket Club fell short at 8.68 runs an over. It certainly wasn’t because of lack of effort. Even after the ‘heavier hitters’ had made themselves comfortable in the Sevens Cricket Grounds pavilion, the rest of the Exiles batting order still chased hard. Dave Adams added 12, Divjot Singh hit 27 off 19, Ajay Krishnan certainly went for it, 28 off just 11 balls which included three x 4s and two x 6s. Akbar Bosan was unbeaten on 18.

The match had been decided by which team’s luck had stuck. The Wombat’s 50 – 50 balls always seemed to find themselves landing in the safe haven of the outfield’s no-mans-land, but for the Exiles’ mishits, more often than not, they found themselves in the grateful hands of a very happy Wombats’ fielder.

Wombat’s fielder heading out to the boundary