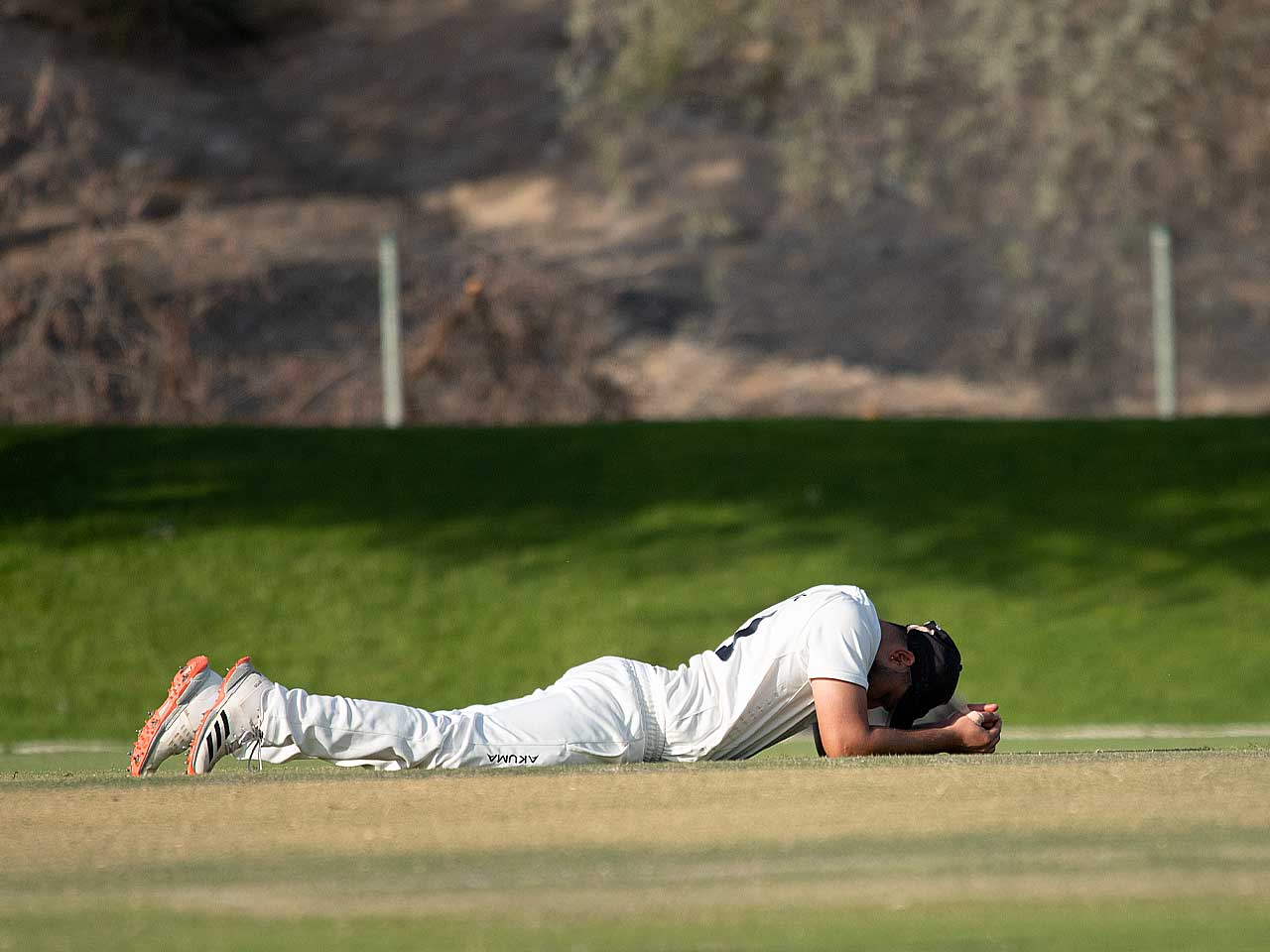 With Dubai Exiles Cricket Club‘s Super League team having already chalked up a win against Emirates NBD Cricket Club in the morning, The Exiles’ Mammoth League side was looking to follow suit and keep their push for the Mammoth League title on the boil with a win over Jabal Ali Mammoths.

Shayan Khilji had a great time with the bat

Vikram Nayak hit 5 boundaries on his way to scoring 48

An afternoon full of hope and anticipation ended in disappointment for the Exiles’ Mammoth League side. Too much time spent bogged down in the Jabal Ali Mammoths’ bowling and too many dropped catches put an end to any thoughts of another ‘W’ in the most important column on the Mammoth League table.

Jabal Ali’s bowlers were a difficult proposition all game

Sairaj Raghavan was busy between the wickets

Shayan Khiliji was third man for the Exiles and alongside Vikram Nayak pushed the score along to 110 before Vikram was caught by Sheridan Hadfield off Abdul Rehman Butt‘s bowling. 108 balls bowled, 110 on the board, it was borderline if the Exiles would get to post a difficult run chase or not.

After adding 18 runs, Sami’s luck scampering between the wickets at every opportunity ran out. Literally. With Sami on his way to the pavilion. Khalid Raja came in to support Sairaj Raghavan who was challenging himself to see just how far he could hit the cricket ball with every swing. Sairaj finished on 34 off 19 balls, including two x 6s. Despite Sairaj’s efforts to pick the pace up, the overs had ticked by and Exiles had 173 runs on the board and were not confident it was going to be enough.

Bhavik Thakkar frustrated as another ball is dropped

From the outset of the Jebal Ali innings it looked like it would only be a matter of time before Jabal Ali overhauled the Exiles total. Despite opener Bibin Jacob departing with only 1 run scored, caught by Sairaj Raghavan off Aditya Khurana, fellow opener Rejee Mohan was thoroughly enjoying himself knocking the ball around the park in all directions. Rejee would finish on 81 not out, off 55 balls which included thirteen x 4s. The sort of score rate the had eluded the Exiles’ innings.

Vikram Nayak bowled as well as he batted!

A few Jabal Ali wickets fell while Rejee was wondering if he’d get to score a century. Mukund Srinivasan scored 17 before being trapped lbw by Vikram Nayak. Mithun Vora scored 2 before being run out. Sundeep Raina‘s wicket was taken lbw by Bhavik Thakkar.

When Sheridan Hadfield came to bat, Jabal Ali were 93 for 4. Unfortunately the Jabal Ali 93 had come off just 12 overs and Exiles were in desperate need of a couple of quick wickets to give themselves a chance of a win.

The chances never came. Sheridan Hadfield is a pretty useful batsman himself, and by the time the Exiles innings total was surpassed, Hadfield had scored 54 of 34 balls, Rejee Mohan had reached 81 and the match was over. Jabal Ali Mammoths taking the spoils.