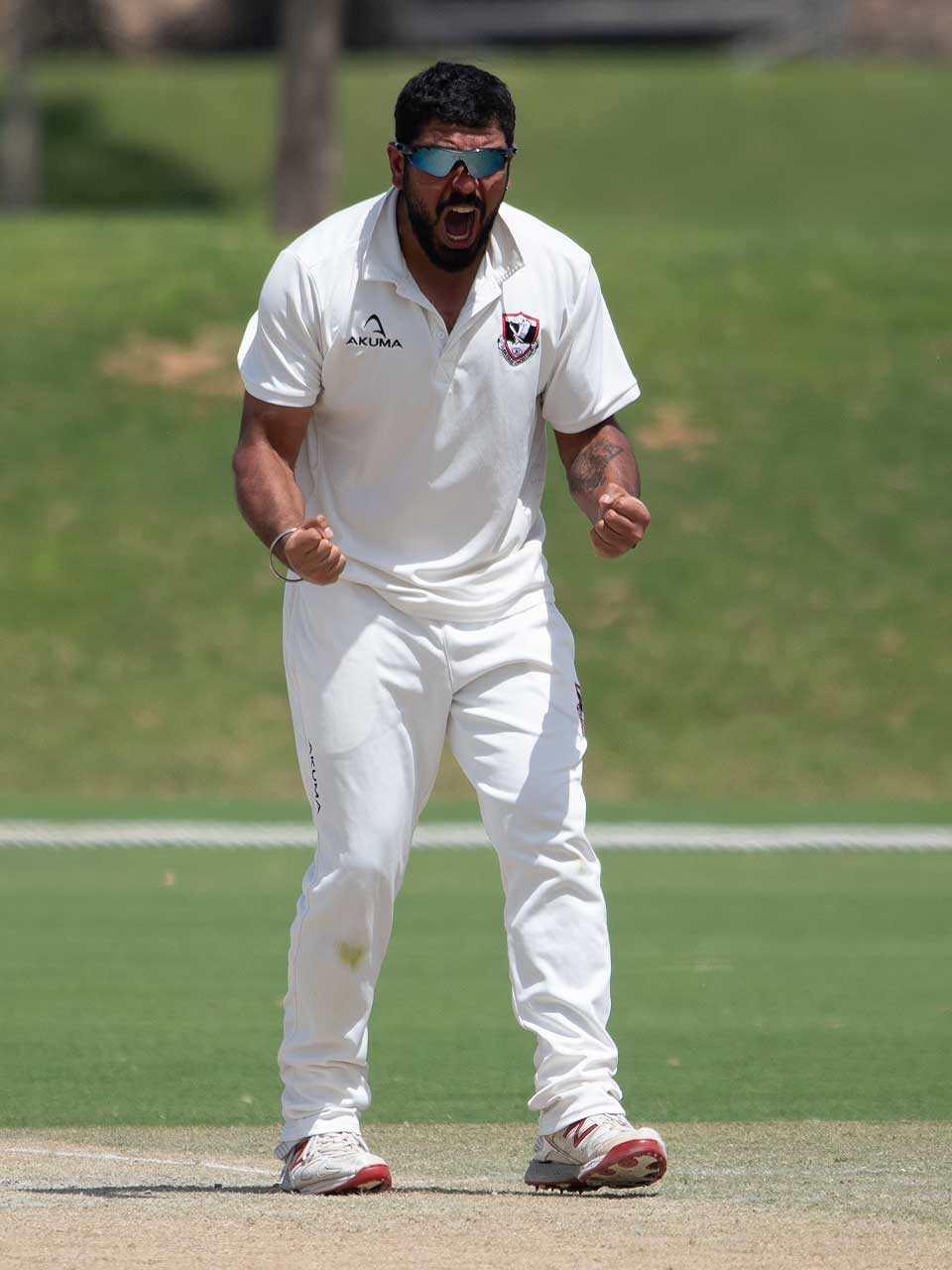 The Dubai Super League play-offs beckoned for Dubai Exiles Cricket Club, a win over Wombats Cricket Club would guarantee The Sevens based cricket team their first ever excursion into the knock-out phase of Dubai’s premier cricket competition. A bright sunny day and two ‘fully loaded’ cricket teams made for a hugely entertaining game of cricket.

Harsh ‘Harry’ Udeshi manages to get back to the crease – just

Unusually, Dubai Exiles Cricket Club won the toss and elected to bat first. Jay Parmar and Harsh ‘Harry’ Udeshi opened the batting for Exiles CC. The reliable wicket of Harsh Udeshi was the first to go, run out for only 10 runs, but Exiles CC already had 49 runs on the board when ‘Harry’ went for the long walk back to the pavilion. Fellow opener Jay Parmar was clearly enjoying himself, smacking the ball around the oval almost at will.

Brannon Varley had come in to bat for Exiles CC and was also making himself very comfortable in the middle. Between Parmar and Varley boundaries were proving plentiful and abundant. When Brannon Varley‘s wicket fell he’d scored 35 runs off 23 balls, an innings that included four x 4s and a six. Exiles CC were 125 for 2.

With 175 runs on the board, Jay Parmar‘s innings was finally brought to an end. The big hitting Englishman had posted 78 runs, five x 4s, three x 6s and moved Exiles CC into a very commanding position.

Clint Berkenshaw was next to bat for Exiles CC. The South African player-coach is not shy about swinging the bat at any ball that is even slightly off line. By the time the final ball of the 25 overs had been delivered, Berkenshaw was unbeaten, scored 59 runs off just 31 balls, hit a couple of 4s and five x 6s. Jack Luffman had been and gone for 3 runs and captain Dave Adams had contributed 5. Exiles CC 204 off 25 overs.

Jay Parmar has a chat

When Yasir Jamil‘s wicket went from the very first ball from Exiles CC, bowled by Clint Berkenshaw, the smiles from the Exiles‘ fielding players could have been seen from space. A good score had been posted, the first Wombats‘ wicket was gone and things were looking very good!

SN Naeem came to the crease, added 7 runs, and was promptly on his way back to the changing rooms. Caught by Siddhant ‘Sid’ Jhurani off Navalesh Naidoo. 17 for 2, still smiling. Wombats‘ opener Mohammed Nasher was providing more stubborn resistance. Joined at the wicket by Sufyan Amin the pair put a partnership together that threatened to chase down the Exiles CC total of 204.

When Mohammed Nasher‘s wicket did fall, a great catch by Dave Adams off Navalesh Naidoo. Nasher had contributed 43 runs but also steered a solid partnership with Sufyan Amin who would finish his own innings with 73 runs off just 52 balls which included eleven x 4s and a six.

Ben Willgoss sorts out his gloves

Dave Adams watches a near miss

This dismissal of Sufyan Amin pretty well signalled the end of any realistic chance for Wombats Yellow. Wicketkeeper Roni Thomas tried to make a fist of things, but was caught by Dave Adams off Brannon Varley for 19. The tail end was mopped up relatively quickly. Brannon Varley clean bowled Rehan Ali for 5. Ali Gohar was caught and bowled by Varley for another 5. AA Ansari was caught by Dave Adams off Clint Berkenshaw for 6 and Muhammed Rameez was caught by Zeeshan Durrani again off Clint Berkenshaw for a duck. Wombats Yellow 194 off their 25 overs.

Into the Dubai Super League play-offs